The new North Precinct Captain, David Emmerick, would like to get feedback regarding public safety concerns. Please take a moment to fill out this one question survey.

- Learn about community programs such as the free smoke alarm program and community fire safety programs. 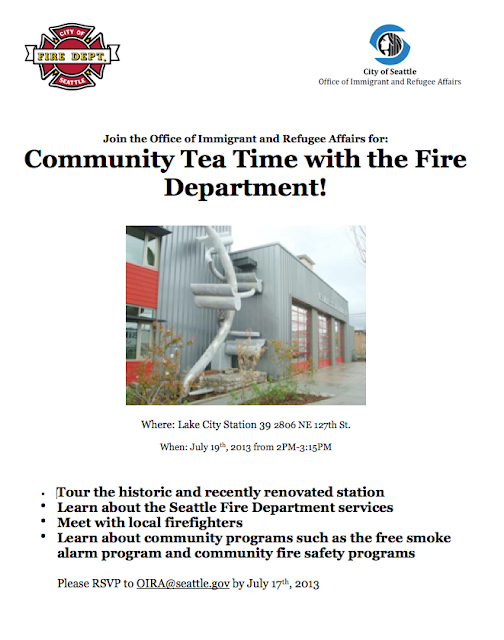 When: Saturday, July 13th from 1pm to 4pm
Where: At the North Precinct across the street from North Seattle Community College ( 10049 College Way North )

All North Precinct residents are invited! Come enjoy food, music, and an opportunity to learn about and interact with many of SPD's specialty units like: K-9, Mounted Patrol, Bomb Squad, and SWAT.

They will be serving FREE hotdogs and ice cream! 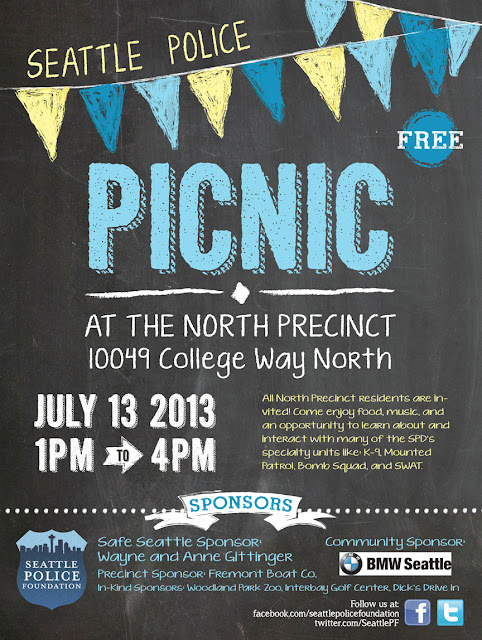 The Lifetime Learning Center in Lake City is offering 9 classes for the summer schedule.
The cost is $50 for registration and you can attend as many classes as you like. You can register online here.
WHEN: Every Tuesday and Wednesday during the four weeks of July, beginning July 9, 2013.

WHERE: 3841 NE 123rd in the Education Wing on the lower floor.
To learn more about the classes call 206-949-8882 or visit www.lifetimelearningseattle.org

In this class, we will exchange knowledge of topics related to our presidents and their spouses. Topics will come as they do in real life-randomly, not chronologically or by topic. Participants will serve as the main resource. Bring a 3 x 5 card to the first class with a sample question relative to any American president. Example: who saved a portrait of George Washington that was hanging in the White House? Each question will lead to a discussion of about five minutes. The discussion should be lively, challenging and fun.
Who was Richard Hugo? Most of you have heard of Richard Hugo House, but you may not know much about this nationally known poet with deep roots in Seattle and Western Washington, as well as in Montana, where I taught with him at the University. We will read two or three poems in each class period, and discuss them, with a focus on the poems set in our area. Copies of poems will be provided, but if you want a book, either the Selected Poems or Making Certain It Goes On: The Collected Poems of Richard Hugo, both published by Norton, are widely available, both new and used.
Created by Marion Rosen to foster, support, and maintain flexibility during the aging years. This goal is aided by music, which provides fun and inspiration to move all the joints with ease in an hour. Come move with us-be more open to the day and to life!
You are invited to an exploration of the International Fine Art of Mystery Writing. Come exchange books, learn about new authors you haven't read. Talk about ideas and your favorite sleuths. Police, Private Detectives, Medical Examiners, Forensic Pathologists, Forensic Anthropologists-even detectives set in the Middle Ages.
The Iron Horse (1924), silent, George O'Brien and Madge Bellamy, 149 minutes. (Note: Because of the film's length, its showing may be divided between the first and second weeks, unless the entire class wishes to see the film in one showing). The Informer (1935), Victor McLaglen, Preston Foster, Una O'Connor, Joseph Sawyer, Heather Angel, Margot Grahame, Donald Meek, Wallace Ford, J.M. Kerrigan, Joseph Sauers (Joe Sawyer) and Donald Meek, 92 minutes. Young Mr. Lincoln (1939), Henry Fonda, Alice Brady, Marjorie Weaver, Arleen Whelan, Eddie Collins, Pauline Moore, Richard Cromwell, Ward Bond, Donald Meek and Milburn Stone, 100 minutes. My Darling Clementine (1946), Henry Fonda, Victor Mature, Linda Darnell, Walter Brennan, Tim Holt, Ward Bond, Alan Mowbray, John Ireland, Jane Darwell and Grant Withers, 97 minutes.
This course will study a number of Robert Frost's better known poems, both for their literary value and their technical skill. The class will include poems from Frost's early and later books, including A Boy's Will, North of Boston, Mountain Interval, New Hampshire, A Witness Tree, West Running Brook, and A Further Range. A packet of poems will be provided for $2.50.
Tai Chi is a slow moving meditation to improve health, balance and spirit. From the gentle practice of the postures, you will learn about your physical and spiritual center.
People use tools and civilization to survive in the natural world. Birds have only themselves. Come along with master birder and author Connie Sidles as she takes you on a tour of bird's anatomy, showing how birds use their physical attributes to survive and thrive. With the help of bird skins from the Burke Museum, you'll learn about feathers, bills, feet, tails, eyes, ears, and other bird parts that allow birds to be perfectly adapted to their environment. After this series of hands-on classes, you'll never look at birds the same way again. 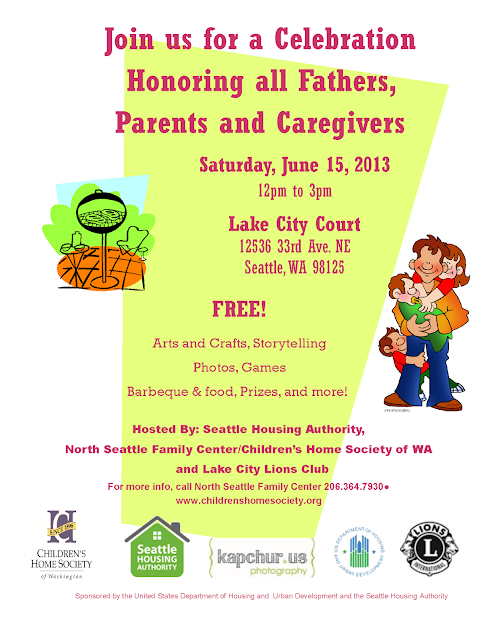 You are invited!
Dear Lake City neighbors and community leaders,
Seattle Housing Authority is in partnership with the North Seattle Family Center, and the Lions Club in organizing a 2013 celebration honoring all Fathers, Parents and Caregivers.  Last year, we had over 150 people attended.  We hope you could join us this year!  At this event, we will have free BBQ, family photo booth (thanks to Kapchur.US Photography), lots of children’s activities, bubble man, and valuable community resource tables available.   For more information, please see attached flyer.
Please come join us and bring your friends and families.
We also in needs of volunteers!  To make this event a successful one, we really depend on our wonderful volunteers.  If you + your friend/family are available to help even for couple hours, please contact Lisa Uemoto at 206-295-8942, or cuemoto@seattlehousing.org
We hope to see you this Saturday, 6/15/2013 from 12pm to 3pm at Lake City Court – 12536 33rd Ave NE


The Olympic Hills neighborhood got to play a starring role in a Seattle-based movie on Monday.

A crew shooting scenes for the film "Laggies" took over 19th Avenue NE near NE 137th Street, just blocks from Olympic Hills Elementary School. The crew worked for most of the day in an area secured by Seattle Police officers during the filming.

The film, "Laggies," is a dark comedy about a woman, stuck in permanent adolescence, who lies to her fiancé about going on a retreat. She spends the time instead hanging out with friends.

In recent days the crew has been spotted filming at Shorecrest High School in Shoreline, and at Ballard's Olympic Manor. It was also reported that they were recently filming on the decommissioned ferry Skansonia on Lake Union.

The filming on Monday included an action scene where a car crashed into a row of mailboxes on the street. A camera was seen mounted inside an older model Ford station wagon used in the scene.

Neighbors came out to see the filming but were asked to keep back as the crew buzzed around the set. Many others wandered over, wondering what was happening in the usually quiet neighborhood.

The movie is directed by accomplished actress, director and writer Lynn Shelton (Humpday, Your Sister's Sister).


Chuck Dickey will be leading a crew of community court "volunteers" to paint out graffiti in Lake City on Wednesday, June 5th. You don't need a court order to help out though, so if you are available please stop by and lend a hand.

They will be meeting up at the Lake City Community Center ( 12531 28th Ave NE ) at 9:30am. Water, doughnuts, and cookies will be available to fuel you through to 3:30 pm if you choose to stick it out that long.

Help make Lake City a little nicer with a splash of paint and some good company.
Below are the results of the Port a Pot survey. Thank you for taking the time to vote.

The results will be sent to the Department of Neighborhoods and we will follow up with them to work out an action plan from the city. Stay tuned.


Lake City residents gathered for a meeting on February 21st to discuss a proposal for a pedestrian- and bike-friendly "greenway" along 27th Avenue Northeast.

The route, which would run from NE 145th Street to NE 125th Street, has been proposed by the Lake City Greenways project with the help of community members searching for safer ways for pedestrians and bicyclists to negotiate our neighborhood and its lack of pedestrian infrastructure—sidewalks.

Most of the people that attended the meeting were residents that live on 27th Avenue NE and wanted to understand how the proposed greenway would affect them and to voice concerns about altering the quiet neighborhood street.

People were vocal at the meeting, both in support of the project and with many concerns—mostly about speed humps, emergency response times and the expense of altering the road.

Residents worried that the addition of speed humps, elongated and gentle traffic slowing devices, would encourage drivers to drive over gravel parking easements in an attempt to avoid the humps.

Residents discussed adding stop signs and speed-detecting cameras along the street. The benefits and issues with both were discussed. People at the meeting said they wanted safer access to the Lake City Hub Urban Village for elderly and disabled people. And proposals for street murals in Lake City were met with support during the meeting. There were many strong opinions shared during the community meeting.

"People want to understand better what it might mean for their street," said Janine Blaeloch, a neighborhood resident working with other community members to bring safe routes via greenways to our neighborhood. "Most people just want information," she said.

A presentation on the Lake City Greenways proposal is posted below. You can read a previous story we wrote about Lake City Greenways and how it can help transform some of our streets here.
Open publication - Free publishing - More greenway
Lake City Baptist Church will begin hosting a winter homeless shelter starting next Wednesday, February 27th and running through March 15th. The shelter is for adults only and will be providing services between 7 pm and 7 am. The services include dinner, sleeping quarters for the night, and breakfast. Union Gospel Mission will be providing sleeping cots and staff to assist.

Rowen Headington and Hannah Olufs from the church are the contacts. Neighborhood group Douglas Park Cooperative asked what the community can do to volunteer hours and resources. Rowen indicated they may need help with cooking oatmeal and coffee around 5am. We will report back with more specifics on how members of the community can volunteer and what supplies they will need when we get more information.