The Taskforce has met twice to date now – On Wednesday, January 16th and Wednesday, February 13th at the Lake City Community Center from 4 to 6 pm. The Taskforce will be meeting for 6 months to come up with an action plan.

At the first meeting, a presentation of the collision data was made. It showed what kinds of collisions were happening, where they happened, what time and conditions, age of involved parties, whether cyclists or pedestrians were involved, and if there were fatalities or injuries. The data showed that LCW has a higher rate of collisions than similar corridors.

At the second meeting, there were three break out groups to identify issues related to enforcement, education, and engineering. The results will be made public soon and will be posted on this site.

The next meeting time and date is to be announce for mid March. It will be a bus tour down LCW to look closer at the locations identified as having issues.

If you would like to be involved on the Taskforce, or just receive updates, please contact the project manager ( Jim Curtin ) at jim.curtin@seattle.gov

This health screening vehicle was purchased with donations from a variety of Lions Clubs and individuals. It is owned and operated by the NW Lions Foundation. In fact, it travels all over Washington and northern Idaho, providing hearing and vision screening for students and the general public. At each stop, local Lions Club members help staff the vehicle.

At Olympic Hills Elementary, Lake City Lions Club members were busily working, ushering students to and from the vehicle, keeping track of paperwork, and assuring each child’s needs were being met.

Northside Youth Program is offering free tutoring at the Lake City Community Center.  This new program, called CAST (Community After School Tutoring) welcomes students of all ages and offers a quiet place to do homework, to read a book, get help on homework assignments, or work on school projects (including the Senior Project required by Seattle Schools).”   The program is free and students must register to participate.  Student applications are due by this Friday, February 22.  Tutoring will be offered on Mondays, Wednesdays, and Fridays from  3:30pm-5:30pm. The first session begins March 4th and runs for 8 weeks. C.A.S.T Tutors work with students individually or in small groups and offer tutoring as well as friendship, encouragement, and guidance. Tutoring subjects include: reading, spelling, writing, and math. (ESL/ELL classes will be offered in Fall 2013.)   Northside Youth Program will also be offering monthly workshops. Topics will include SAT/ACT prep, workplace readiness, college admission support, scholarship searches, college admission essay 101, high school resume help, and resume writing.

If you’re considering schools for your child, consider Jane Addams K-8. We are an environmentally-focused E-STEM school providing a creative and dynamic environment for children from kindergarten through eighth grade. Seattle Superintendent Banda just announced that Jane Addams K-8 was named one of 6 Schools of Distinction in Seattle this year. This award is based upon students’ outstanding academic improvements in math and reading. Come see what we offer, including electives such as MESA (Mathematics Science Engineering Achievement), art, drama, music, choir, PE and foreign language.

For families interested in selecting an option school instead of a neighborhood assignment school, the window for open enrollment is February 25th  through March 8th.

Have you received your February ballot?  Please vote YES on Prop 1 & on Prop 2!  These two levies are not new taxes–they are a continuation of expiring levies. A simple summary of the two levies is available here.

What do these levies mean for Lake City area schools?

The Capital Levy (Prop 2) will help fund new construction and safety improvements at multiple Lake City area schools. The Seattle School District is facing severe capacity shortages, particularly in our NE corner of Seattle, just based on current enrollment. With projected enrollment included, the capacity issues worsen.  Without Prop 2 passing, we’ll see Lake City schools overcrowded and thriving programs dislocated or disbanded altogether. The Operations Levy (Prop 1) provides crucial support for everything from textbooks and transportation to student activities and support for bilingual and special education students. With schools bursting at the seams, whether or not the levies pass, the following Lake City area schools will be impacted:

The Cedar Park site formerly housed a neighborhood elementary school, but has been leased to an artist cooperative for the last 30 years. Regardless of whether the levy passes or not, the school district plans to re-open this site. At a recent community meeting, Pegi McEvoy, Assistant Superintendent of Operations, presented two scenarios: 1) if the levy passes, Cedar Park will be used as an interim site for Olympic Hills, then reopened as a permanent school, 2) if the levy fails, the district will need to reopen the school as soon as it can be made ready; a time crunch that will limit the district’s flexibility with how to redevelop the site.

Jane Addams To relieve overcrowding at Eckstein Middle School, the district will begin a comprehensive middle school at the Jane Addams site in fall of 2014, called Jane Addams Middle School (JAMS).  Currently, the Jane Addams site houses the Jane Addams K-8 option program (JAK8). It’s expected that these two programs may be co-housed at the site for one or more years. If the Capital Levy passes, the JAK8 program will be permanently relocated to a new facility at the existing Pinehurst site by 2017. If it doesn’t pass, it’s unclear what will happen to the JAK8 program. With JAMS will come a new middle school feeder pattern, with Olympic Hills, John Rogers and Sacajawea feeding into JAMS instead of Eckstein. This has raised equity concerns, as these elementary schools have much higher concentrations of low-income students than the elementary schools which will remain in the Eckstein feeder pattern. In a meeting last week, the School Board voted 4-3 to wait until 2014 to open JAMS in order to allow adequate planning time to address these concerns and bring this new school online.   Pinehurst

If the levy passes, the existing Pinehurst site will have a new facility built on it to house JAK8. District plans for the existing Pinehurst K-8 program aren’t specified, but the possibility of relocating it to the Cedar Park site was mentioned at the Cedar Park community meeting with Pegi McEvoy. If the levy doesn’t pass, the Pinehurst program may experience even more radical changes. It’s unclear what the district would do to relieve capacity issues, but almost certainly the Pinehurst site would get more students than it currently does.   John Rogers, Sacajawea & Jane Addams If the levy passes, these three schools will receive important seismic upgrades to improve earthquake safety.   In addition to benefiting Lake City area schools with new construction and seismic upgrades, these levies will also fund sorely needed projects in other areas of Seattle, such as replacement of the severely dilapidated Arbor Heights building.  If approved, these levies would equate to a $13/month increase for the owner of a $400,000 home. The following chart provides a comparison of how Seattle’s education levy tax rate stacks up against other cities:

*Levy rate chart available via www.seattleschools.org **Note:  With any school construction, the school district will work with the City of Seattle to address neighborhood impacts following SEPA and best practice protocols for community involvement. 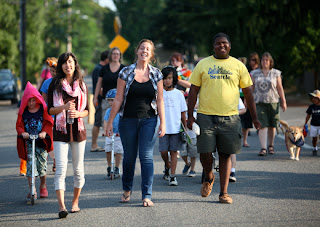 Recently we wrote about Ray Dalton, the Seattle singer that joined members of Douglas Park Cooperative for our annual block party and helped lead our kids parade with his powerful voice.

Along with local hip-hop artists Macklemore and Ryan Lewis, Dalton's memorable voice has shot to the top of the charts with the track "Can't Hold Us."

Well, last night Dalton, Macklemore and Lewis were the featured artist on the David Letterman Show in the Ed Sullivan Theater. Their performance was flawless. You can see the video below. Watch until the end to see how Letterman mixes up the artists and creates a mildly awkward moment.


You have likely seen this image in recent weeks. It was sent from the International Space Station by Canadian astronaut Chris Hadfield in a tweet from hundreds of miles above as the space station passed over Seattle. The image made the rounds on social media and local blogs when first published. The astronaut has become quite the Ansel Adams in the sky with his stunning photography of land and city scapes.

Well, if you look closely at the image of Seattle you can distinctly see our neighborhood, defined by Lake City Way, on the outer limits of Seattle. Click the image above for a larger view that clearly shows Lake City Way and our business core at the top right edge of the image. 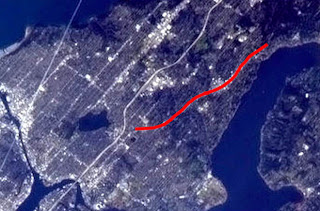 As we all know, Seattle is a great place to live. But who knew our amazing city and even our corner on the outer limits looked so good from space.

What is Thornton Creek?

It is the unique, and even sometimes the odd, that makes a place interesting and defined.

Lake City has a few quirky and unique elements that help to define the neighborhood (although we could use many more).

The old bank facade, aka the "Arc de Lake City," at the Mini Park at 125th and LCW is one that comes to mind.  Also the giraffe near the intersection of 30th Avenue NE and LCW is an element that breaks up a drive along the arterial roadway.

The steel sculpture in front of the Verizon Wireless retail store and the boulders with fins in the median of LCW are works of art that help to give our neighborhood some character.

The almost iconic neon sign on Lake City Powersports and Dick's Drive-In's neon give a bit of color to our neighborhood during these dark and dreary days.

Well it seems we have another quirky thing to add to the visual elements that make LCW a bit different that the endless stretches of commercial-lined highways we all travel everyday.

This guy (below) has been making appearances on the road near the intersection of LCW and NE 123rd Street.

Is all this fog getting you down? Here’s something to look forward to!   This summer, the Lake City Farmer’s Market will be back in front of the Lake City Library and they’ll be piloting new hours. Every Thursday from June 20 through September 26, the market will be open from 2:30 to 7:30pm. This is an hour longer than previous years, though the overall season is slightly shorter.   Expect more fun market activities this year, in addition to old favorites like the zucchini races and live music.  As market season approaches, vendor lists and other updates will be available on the Lake City link of the Farmers Market Alliance website.